The Yashica Y16 first appeared in 1959. Following the now familiar bar shape design it is 100x50x31mm and weighs 220g without film.  It has a Yashinon 25mm (f3.5-16) fixed-focus lens (a few sources cite an f2.8 version) and the typical 10x14mm negative size. The focal plane shutter has speeds of 1/25, 1/50, 1/100, 1/200 and S. The S is an interesting option that ought to have been emulated on other camera designs. When depressed fully and released quickly it gives 1/10 s. For a  “time” exposure the shutter release is pressed partly and released. This opens the shutter. A second continuous press completes the action and closes the shutter. With B you have to hold the shutter open and with T you have to press the shutter twice. S gives the best of both actions.

The other innovation is the unique “Clip-load” film cartridge. These are pushed into the side of the camera and the end is labelled with the film type and speed and replaces a plastic dust cover on the right hand side of the camera. The clip gives 24 exposures on 16mm film. Mid roll switching is possible and for the loss of a single frame. This feature was seen in the Konan Automatic without loss of a frame. Later Minolta cameras not only reset the counter but but would also partly expose a previous frame, the current one and part of the next.

The cassette combined the film chamber with pressure plate and part of the film transport. A gear on the outside of teh cassette connects to the spindle on the take up spool; when the film advance wheel of the camera is turned a rod and hence the take up spool. Just over one quarter turn moves tot he next frame making rapid sequence shooting possible. Unfortunately the down fall of the camera is this unique cassette which where difficult to find, limited in film choice and awkward to load (see the Subclub DARKROOM for details). It is a quality camera, over looked and underrated.

The camera also had a built-in cable release socket, PC contact for flash, and a tripod socket. 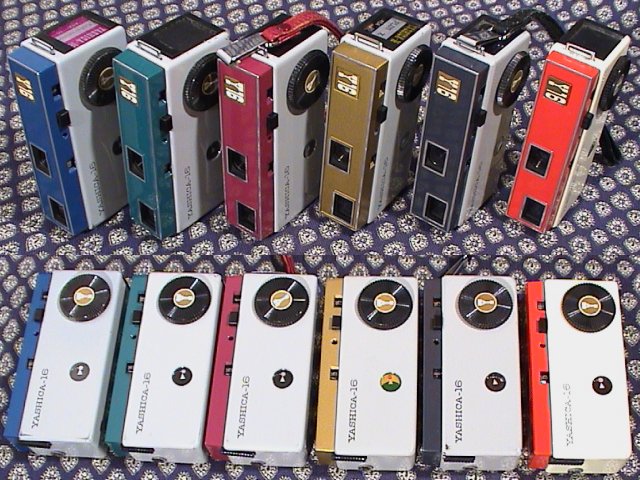 A cream colour body is matched with an orange/tangerine front panel and there was even an all-black body available. 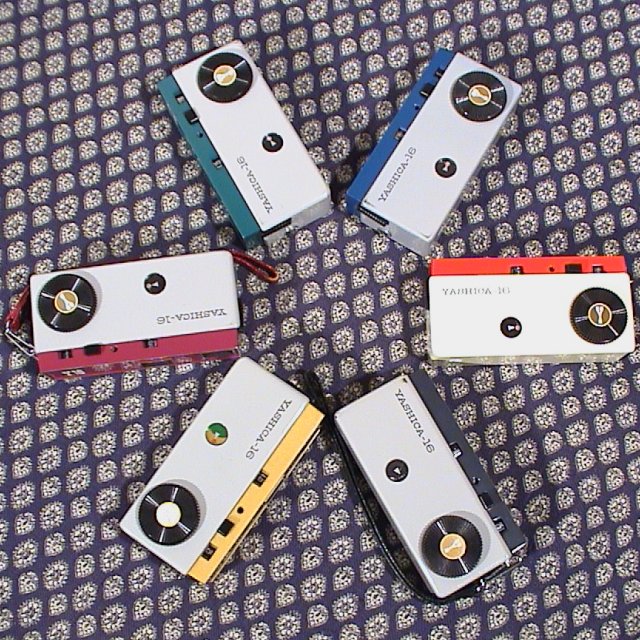 Yashica made several clip-on filters: UV, Y2 (yellow), O2 (orange), 1A, 82A, 81B and 80A. The filters hold on to the front of the camera clipping to the top and front held in place by a spring on the hinge.  They also made a full line of accessories:-